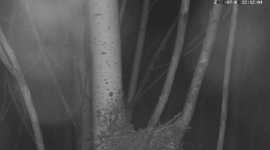 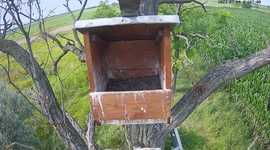 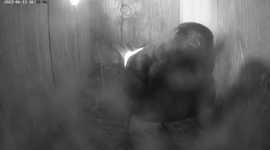 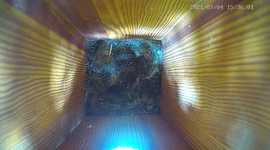 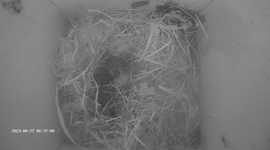 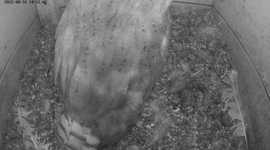 The other egg was kidnapped by a jay too

A jay kidnapped one of the abandoned eggs.

Unfortunately, they left the eggs permanently.

The tawny owl or brown owl (Strix aluco) is a stocky, medium-sized owl commonly found in woodlands across much of Eurasia. Its underparts are pale with dark streaks, and the upperparts are either brown or grey. Several of the eleven recognised subspecies have both variants. The nest is typically in a tree hole where it can protect its eggs and young against potential predators. This owl is non-migratory and highly territorial. Many young birds starve if they cannot find a vacant territory once parental care ceases.

This nocturnal bird of prey hunts mainly rodents, usually by dropping from a perch to seize its prey, which it swallows whole; in more urban areas its diet includes a higher proportion of birds. Vision and hearing adaptations and silent flight aid its night hunting. The tawny owl is capable of catching smaller owls, but is itself vulnerable to the eagle owl or northern goshawk.

Tawny owls pair off from the age of one year, and stay together in a usually monogamous relationship for life. An established pair's territory is defended year-round and maintained with little, if any, boundary change from year to year. The pair sit in cover on a branch close to a tree trunk during the day, and usually roost separately from July to October. The tawny owl typically nests in a hole in a tree, but will also use old European magpie nests, squirrel drey or holes in buildings, and readily takes to nest boxes. The typical clutch of two or three eggs is incubated by the female alone for 30 days to hatching, and the altricial, downy chicks fledge in a further 35–39 days. The young usually leave the nest up to ten days before fledging, and hide on nearby branches.